“How satisfied were you with your experience today?”

Most people regularly see this pop up after a customer service experience.

The business they worked with is collecting data to improve their services through an online satisfaction survey.

The goal of businesses is to achieve a 60% response rate to their surveys. Once a response rate falls below 50%, the survey’s reliability is questionable because of the higher nonresponse bias percentage.

Getting to that 60% doesn’t come naturally – but you can increase your chances at a higher response rate when you create engaging surveys that capture people’s attention.

If you want to know how to make surveys more engaging, start with these ten survey strategies to increase your customer response rate through interesting and visually capturing questions.

1. Customize Your Survey for Your Audience

Sending out your survey to hundreds of people doesn’t guarantee responses. A single male in his late fifties might not complete a survey about diapers – while a mom of five probably won’t be interested in answering questions about sports cars.

To create an engaging survey, begin by choosing an audience interested in the topic of research. One way to personalize surveys is through changing questions that adjust to people’s answers.

If someone says they don’t watch TV, the next question on the survey shouldn’t be, “What’s your favorite TV show?” Irrelevant questions waste people’s time and decrease the chance of consumers finishing the survey.

Another way to personalize a survey is keeping it inclusive. Use wording and blank spaces that apply to a large demographic. For example, sections for filling in names should incorporate symbols and specialty letters to allow names from all cultures and languages. 2. Capture Your Audience’s Attention from the Start

Which hotel survey would you be more likely to answer?

“Please Submit Your Feedback” or “Enjoying your stay? Let Us Know!”

An engaging survey is pointless if no one clicks on it. Draw people in with titles that are friendly, easy to read, and straight to the point.

Connect personally with your audience by using the first and second person – I/mine and you/yours.

Skip detached, formal wording. Instead, take ownership of the survey and speak directly to your audience.

Once you’ve made that connection, continue with conversational speech. No need to write like you’re submitting the survey to your college professor. Let academic writing die unless you’re gathering specialized research on an academic topic.

Use contractions, casual speech, and a touch of humor – so people feel like it’s a conversation rather than a graded test. 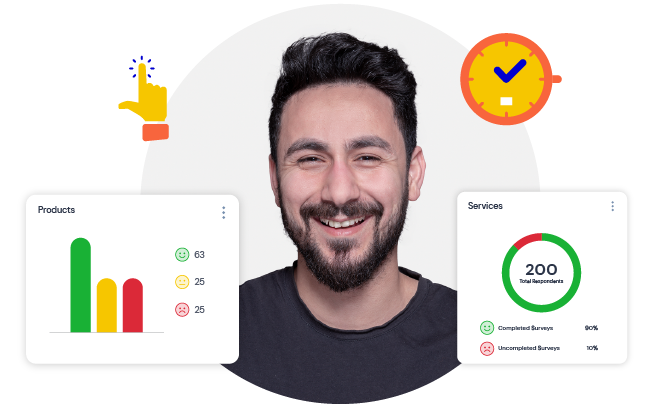 4. Keep the Questions Short and Simple

Make your sentences short and easy to read – staying between 15 to 20 words per sentence on average. The longer a sentence is, the less information your audience processes. When you hit 43 words in one sentence, people comprehend less than 10% of the information.

If you want to use the data you collect for research, having people read the full question and answer accurately is essential. If people aren’t finishing the sentences before responding, all your research is compromised.

The more questions on a survey, the faster people will answer the questions. If you want people to take their time and give valuable responses, limit the number of questions to only the most relevant information.

For one-question surveys, respondents often take over a minute on the question. Once respondents have over 25 questions on a survey, their response time drops to less than 20 seconds per question.

People are also more likely to abandon a difficult survey. Nearly 90% of people complete easy surveys rate, while harder surveys have an 82% completion rate. No one wants to waste their time on questions they can’t understand. If they can’t quickly respond and move on, people are more likely to bail altogether on the survey.

6. Add Variety to Your Questions

The average person’s attention span is 8 seconds. That’s the amount of time you have to capture your audience and hold their attention.

If every question on your survey is multiple choice with “Very likely, somewhat likely, not very likely, not at all” responses, people will grow bored very quickly.

Change up your wording, appearance, and response style for each question to recapture your audience with each new answer. Avoid using too many open-ended questions because they are tedious to type.

Online content with images gets 650% higher engagement than straight text.

Survey visuals aren’t just background decoration. Replace a 1-10 scale with faces or replace instructions like “next” with graphics.

One effective survey visual is a progress bar that encourages users to keep going – like seeing the finish line in a race.

Visuals don’t just apply to pictures. The way you position the text on a page affects how people respond. For example, if you have a neutral option in a multiple-choice question, place it in the middle of the responses. 8. Create a Survey That Works Across Multiple Platforms

While 77% of households have a computer, 46% of people use smartphones online over computers, and 4% prefer tablets. Yet, those who use computers stay on websites longer than those who use mobile devices.

If you’re creating a survey, don’t assume people will take it on a computer, especially if the survey is on social media. Mobile use on social media jumps up to 80%. Make your surveys mobile and tablet-friendly.

Also, consider cutting too many high-tech add-ons for your survey that might make it incompatible with older devices.

Multiple fast-food restaurants add surveys at the bottom of your receipt – with the promise of free food for completing the survey.

Incentives like that are an effective way of encouraging people to complete your survey. Over 75% of consumers value businesses and brands that offer incentives. A few common incentives are:

Present the incentive at the end of the survey – along with a note of gratitude. Some surveys email survey respondents immediately after with additional thanks for their time. This simple act leaves the audience with a positive impression of your brand and recognizes the value of their time and feedback.

10. When You Send a Survey Matters

After eating a meal – many people want to take a nap. The least productive time of day is 2 p.m., right after lunch. Sending a survey while people are lying down for a nap will see a lack of engagement.

However, sending out surveys at 6 a.m. before other emails arrive will get a higher response rate. The second peak of responses occurs in the evening between 6 and 9 p.m. Mondays are the most effective day for sending out email surveys.

Find the Right Survey Platform for You

Creating interesting surveys starts with finding the right survey platform. You will want a platform that allows you to customize the demographics, visualize your survey, and create different questions.

Designing a survey doesn’t have to be tedious.

The survey should be as fun to create as it is engaging to complete.

CheckMarket offers a friendly, modern platform that focuses on engaging an audience and bringing in comprehensive and actionable feedback.