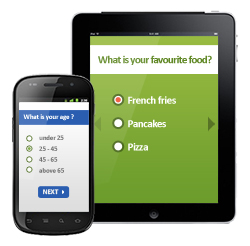 The technological evolution marches on and opens up attractive new possibilities. Mobile research is undoubtedly one of them. The explosive growth of smartphones and tablet PCs like the iPad ensures that almost everyone is online all the time these days. Moreover these mobile devices will become cheaper, faster, more reliable and more ubiquitous. It is time to act and take advantage of the new opportunities mobile research provides. How to use it?

There are two approaches for doing mobile research. The first one is to invite or recruit respondents to respond to a survey via a mobile phone. Or you can use interviewers to survey respondents by using an iPad or another mobile device.

In the first approach, you can question for example people via their smartphone about the TV program they are currently watching. Or you can survey specific target groups about spending their weekends. You can even organize contests or evaluate advertising campaigns.

For the second application with interviewers on site there are lots of opportunities for both B2B and B2C research. You can gather feedback on events such as concerts or fairs, evaluate purchases or measure satisfaction in retail outlets. Your own staff can conducting the interviews, but make sure that they do not influence the respondents.

A variant of the second option is a tablet PC that circulates in a group so everyone can fill in the survey in turn. In schools or training centres you can collect feedback with an iPad at the end of a training course.

Along with the social media, the mobile approach offers market research new challenges and a range of opportunities. The information overload makes it increasingly difficult to attract the attention of today’s busy people that are always on the move. Therefore mobile research can serve very well as a complement to traditional research methods.

Mobile Research is the instrument par excellence to ask relevant questions ‘on the spot’’. These are tailored to the location where the respondent is situated and the activity he is doing. You cannot get closer to the consumer than via the mobile device in his pocket.

Consumers become the eyes of the researcher or marketer showing him 24 hours at a day a 360° view of reality and providing him with immediate feedback. This is an incredible wealth of information.

Smartphone based research offers you many distinct advantages. The most important are:

Mobile research requires a slightly different approach compared to traditional research. For example it is recommended to keep such studies short. Participation should not take too much time or impact the activities that the respondent is currently doing. If the survey project takes more time the respondent should have the opportunity to stop and to continue later. This is a default option for CheckMarket surveys.

Work with short questions and possible answers and try to eliminate open-ended questions, as they influence the response rate. Mobile phone screens are small, so lay out your page(s) so that the answers are clearly visible and easily clickable. Avoid scrolling (this also applies to common online surveys) and make sure that you test on different devices.

Considering the target audience you can do no harm to foresee any entertainment value in your survey, without affecting the reliability of course. Communicate also to the respondent that the participation costs and the exchange of data are not on his behalf.

If you want to generalize the results, keep in mind that most mobile respondents are generally younger than other respondents, belong to higher income segments, and work more often full-time.

Mobile research adds an undeniable value to traditional distribution methods. It is can be used for short research projects that require context-oriented questions related, for example related to the location where the respondent is located and/or the activity he is performing. It is also a perfect solution for otherwise difficult to reach target groups can.

In the future, this type of research becomes increasingly important. Make sure you do not miss the train!