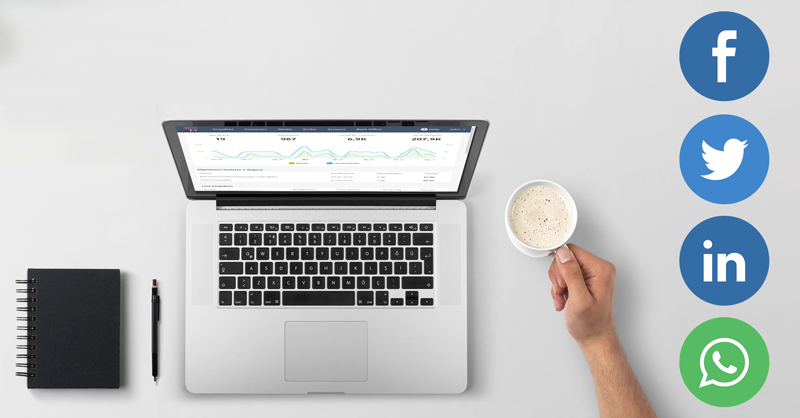 There’s no getting away from social media on the media landscape these days. A question that often comes up is when and how can social media be used in the framework of an online survey. Sites such as Twitter, Facebook and LinkedIn are particularly effective when used to link respondents to a survey.

Depending on your objectives when compiling your research project you choose one or more target groups. Facebook fans or Twitter followers are possible populations. Social networks have huge potential. Below you will find some key figures for the big three.

Facebook has more than 1.65 billion monthly active users and is the largest online collection of socio-demographic information. On average users have 130 Facebook friends. A typical Facebook member makes 90 contributions to the website a month. All users combined are active for more than 700 billion minutes a month on this social platform. 70% of Facebook members use one of the website’s applications at least once a month.

Twitter, the so-called ‘SMS service of the internet”, attracts over 315 million visitors every month. Every day 300.000 new users are added. As a result, more than 500 million “tweets” are sent on a daily basis. In 2008 Twitter was familiar to 5% of American adults. Today this awareness has increased to 87%. Among the active Twitterers 51% follow companies, brands or products on social networks.

LinkedIn, the social network aimed at business people, was launched in 2003. In the meantime it has grown to more than 400 million members and more than 1 million company profiles. The Netherlands, for example, is one of the top 5 countries with the most members and has the highest penetration level of any country.

When you want the largest possible panel for your survey but don’t possess a large (enough) database, you can post a social link to your survey. In this way you can quickly collect accurate data. The pace of communication on these kinds of sites is extremely fast, so you can expect quick results.
Many Facebook users are familiar with quizzes, games or other applications, while Twitter users tend to send interesting information to their followers via a retweet.

To attract successful respondents you must of course have enough friends or fans (Facebook), connections (LinkedIn) and followers (Twitter).

Some suitable applications for a ‘social’ survey are examples like image research, a poll, a behaviour survey, or measuring the use of a product or service.

What are the important points for a survey that totally or partly chooses an online social approach? Mention the subject matter clearly in the title of the post or tweet. Provide a clear start page that outlines the purpose. You might also want to use an incentive to increase the number of responses. Encourage the respondents to post or retweet the link to the survey.

The graph shown above illustrates a CheckMarket survey. To increase the response level Twitter was used as a channel after one week. Responses immediately doubled that day compared to the day before. The tweet was picked up and retweeted several times. As a result, on day 11 the response was five times higher than average. By using Twitter the total number of respondents increased by more than 50% and without any additional recruiting costs. The impact was also felt immediately: soon after a tweet, respondents are immediately filling out the survey.

How to use social media for your survey

CheckMarket’s tool makes use of Facebook, LinkedIn and Twitter. With a few clicks your survey becomes viral. How does this work?

You go to the Distribution section of your survey and choose “Via web” as one of the methods and then “Hyperlink”. (You can also choose other distribution methods for your survey as well). When you have saved your selection, you go back to the distribution page and select “URL for the survey”. There you will find a tab “Social media”.

Here you can make an abridged URL for your survey and publish it immediately on one or more platforms.

In the example shown below, Twitter has been chosen. A link is made directly to the Twitter website and a tweet appears with a brief introductory text and the abridged URL. This text can be modified and, subsequently, the survey invitation can be tweeted immediately. Make sure that you have already launched the survey when you spread the link via one or more social media platforms.

Measuring the impact of social media

What is the direct impact of social sites on a survey? How many respondents does it produce? What are their answers?

In the results of your surveys you get an overview of the responses generated by the social media. In the ‘Report’ section of the distribution overview you will find an overview of the websites that produced successful respondents for your survey. You will also find the sites Facebook, Twitter and LinkedIn here (if you used them to recruit your answer panel).

If you want to view the results of the referring sites in detail then you can download your survey results as ‘raw data’. You will get an overview of the answers per respondent. One of the columns in this file contains the ‘referring site’ per respondent.

Social media can seriously enhance the approach to a survey project. Using sites such as Facebook, Twitter and LinkedIn allows you to quickly find respondents and collect answers. With the CheckMarket tool you can quickly and efficiently link your surveys to the most important social networks.

Good luck with your viral surveys!